About Daniel: Picking Up the Pieces 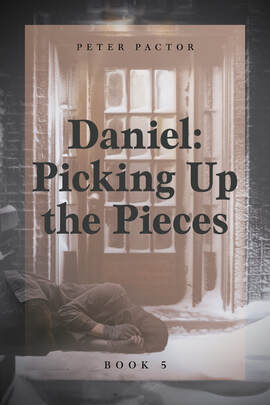 The 1929 stock market crash has come and gone, and Daniel, much criticized and mocked for his predictions of that event, has been vindicated. Now he wants to go back to the carefree days of being a boy, but it's impossible. When his bank hires a black man as a guard, Daniel stands up against discrimination and bigoted opponents. He rescues and becomes the guardian of three homeless, abused teenagers. This is a story of human struggles at the onset of the Great Depression that will touch your emotions and challenge you to reconsider your perceptions of those conditions that still persist a century later.
REVIEWS
​
"Many people lost everything in the Stock Market Crash of 1929.  This story is about what happens afterwards. Daniel is thirteen years old, very smart and mature for his age. He has been working overtime after the crash with his multiple responsibilities and commitments. He really tries hard to take some time to be a teenager but there’s no time for that – people are struggling, and he has the means, and the desire, to help. Picking up the pieces is literally what Daniel does as he goes up against people that still oppose him, even after all his predictions unfortunately come true.  He also encounters some new challenges such as discrimination and homelessness.

Daniel: Picking Up the Pieces is the fifth book in the Daniel series. I haven’t read them all, the first one I read was book four, Daniel: The Age of Dissolution. I really enjoyed the story, so, when I was asked if I wanted to read book five – of course, I said yes! I’ve enjoyed learning more about the stock market crash and the depression. It seems like life was a lot harder in those times, but a lot of things are still relevant (sadly) today, like homelessness – especially among teenagers.

After reading book four, I was used to Daniel’s mannerisms and maturity, but it seems like Daniel grew up even more in this book. He expands his company and buys his school and a hotel! He also becomes a guardian to three homeless boys. And even though I found this part of the story the most unbelievable, (a thirteen-year-old being a guardian to older boys), it was actually the part of the book I enjoyed the most. The teens and their struggles were so lifelike and realistic. Though I couldn’t identify with them personally, their stories really made me feel sad and angry about their situations. The abuse they suffered was incredible – one of the teens had a mom who didn’t even name him – what?  Seriously, how can people act like this?

One part I really connected with was the section where Daniel talks about goals and how if you don’t have goals all you have are wishes. He tells the boys to write down their goals. Then he tells them to copy them every day because this is setting a mindset for them to actually happen. We talk about this at our church group – your thoughts are your reality.

I think Daniel: Picking Up the Pieces, and the other books in the series would be great for teens and older and I recommend it."
— Reviewed by Amy C. (age 15) for Reader Views Kids


"The author's background as an educator is heavily imprinted in the story, teaching readers along the way, almost invisibly, with the life lessons introduced to Daniel and his friends."
— Sheri Hoyte for Reader Views


"Aristotle said that educating the mind without educating the heart is not educating at all. Peter Pactor is a master of taking us on an educational journey. We join Daniel and experience an insightfully amazing buildup of the Great Depression first hand. Our hearts and minds truly enjoy the ride."
— Dr. Jeff Johnson, Distinguished Toastmaster