About Daniel: The Age of Anxiety 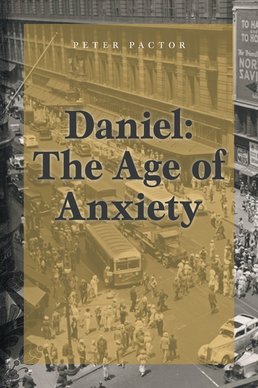 Daniel continues to struggle to overcome the prejudices against him because of his age, his wealth, and his intelligence. It is hard to be different.

Daniel's fear of and certainty about the coming stock market crash followed by a long depression finally drive him to act. All the experts say the economy is good, but Daniel believes they are wrong. He decides to hold public forums to discuss the coming collapse with the hope that he will be able to convince even a few people to get out of the market and to prepare for the crash and depression. Adults not only don't believe him, but they also mock him because of his youth and inexperience.

In his quest to warn people that the crash is coming, he sets himself up as a target and acquires more enemies. People believe what they want to believe, and in 1929, people believed that the economy was good and that the bull market would go on forever. It is dangerous to kick other people's sacred cows.
Multi-Award Winner in the Reader Views 2017/2018 competition:
First Place in Young Adult Literature
Second Place in General Fiction/Novel

​"I really enjoyed this story. The author does a fantastic job with descriptions and the settings and includes detailed historical information surrounding the time period. I found Daniel and his friends to be very entertaining and the storyline engaging."
-Arianna Violante, YA Reviewer for Reader Views
PURCHASE
You can purchase your copy of Peter Pactor's Daniel: The Age of Anxiety at any of these online book sellers:
Daniel: The Age of Anxiety is also available for ebook from these retailers: