About Daniel: The Age of Dissolution 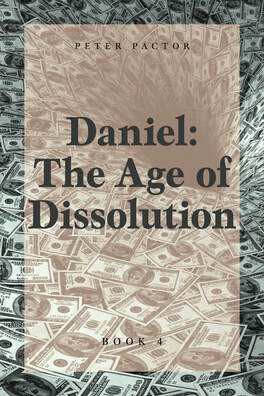 With the stock market collapse, Daniel's year-long quest to warn people about the imminent crash and its consequences has ended. He has been vindicated for the mockery and scorn that were heaped upon him, but he feels that he has failed because he had not convinced more people to leave the market. There is little satisfaction in being right when people have lost their life savings and more.

To visit the New York Stock Exchange where hundreds of men are standing silently in the streets, or sitting on the curbs crying, embarrassed, dejected, and dispirited brings Daniel only pain. He receives threatening letters and is physically attacked by those who believe that he has caused the market's collapse and their misfortune.

​Through his own strong-willed determination and the support of his family of friends, Daniel begins to make the transition from warning people to providing relief for those who have already or soon will become victims of the imminent depression. And yet, Professor Vogel is even more determined to discredit and destroy him.
REVIEWS
​
"“Daniel: The Age of Dissolution, by Peter Pactor is highly recommended reading and I look forward to reading more books in this series."
-Paige Lovitt for Reader Reviews (click to read the full review)


“Daniel: The Age of Dissolution is a great story woven within the details surrounding an important time in American history. Daniel and his friends are definitely above-average on many levels, especially maturity-wise and intellectually. I often forgot that Daniel was only thirteen because his mannerisms reflect that of someone much older. And while I’ve never met or known anyone like Daniel, I found his character inspiring and leading people to be the best versions of themselves. He definitely made me look at some things differently, like his attitude toward learning.  He learns for the knowledge and self-improvement and doesn’t look at it like a chore while most teens I know, myself included, go into learning with the attitude of just doing it for the grades. He does seem a bit full of himself at times but that’s where his friends can be counted on to bring him down to earth. The depths of their friendships mean they can be candid with each other, and I liked the way they treated and talked to each other – they are quite literal. Literally.

I’m hooked on Daniel’s journey. The ending is really good and leaves way for the next installment of the series. I recommend readers start the Daniel journey at the beginning in order to grasp all the intricacies of the story because, while Daniel: The Age of Dissolution by Peter Pactor is a great read all by itself, there are definitely references to things that were included earlier in the series.
-Amy C. (age 15) for Reader Views Kids


"Pactor has an incredible talent for drawing the reader directly into the environment of the story. * * * * * * * *
The author's background as an educator is heavily imprinted in the story, teaching readers along the way, almost invisibly, with the life lessons introduced to Daniel and his friends."
-Sheri Hoyte for Reader Views


"Daniel: The Age of Dissolution was like being on Wall Street in 1929 and experiencing firsthand what was seen and felt. Peter Pactor distinctly captures the life experiences of a gifted 13-year-old who had the vision to predict the Great Depression. I really enjoyed not only the journey of Daniel, but the real-world historical lessons imparted as I got to know him."
​-Dr. Jeff Johnson, Distinguished Toastmaster
PURCHASE
You can purchase your copy of Peter Pactor's Daniel: The Age of Dissolution at any of these online book sellers:

Daniel: The Age of Dissolution is also available for ebook from these retailers soon: